“We were very impressed by these numbers…exponentially higher than software RAID performance. Setup is easy, performance gains are easily measurable; well worth the PoC to see if these cards are the right fit.”

GRAID made waves last year by introducing an NVMe “RAID card.”  Of course, it wasn’t exactly a RAID card at all, but an NVIDIA GPU, paired with Graid’s software. The net results were astonishing, their first-gen card was able to hit nearly 9 million 4K random read IOPS with minuscule latency, with just 8 SSDs.

Now the company is back with the Graid SupremeRA ID SR-1010 which ups the ante with a Gen4 GPU and updated software that can deliver up to 19 million 4K random read IOPS and 110GB/s large block sequential read. 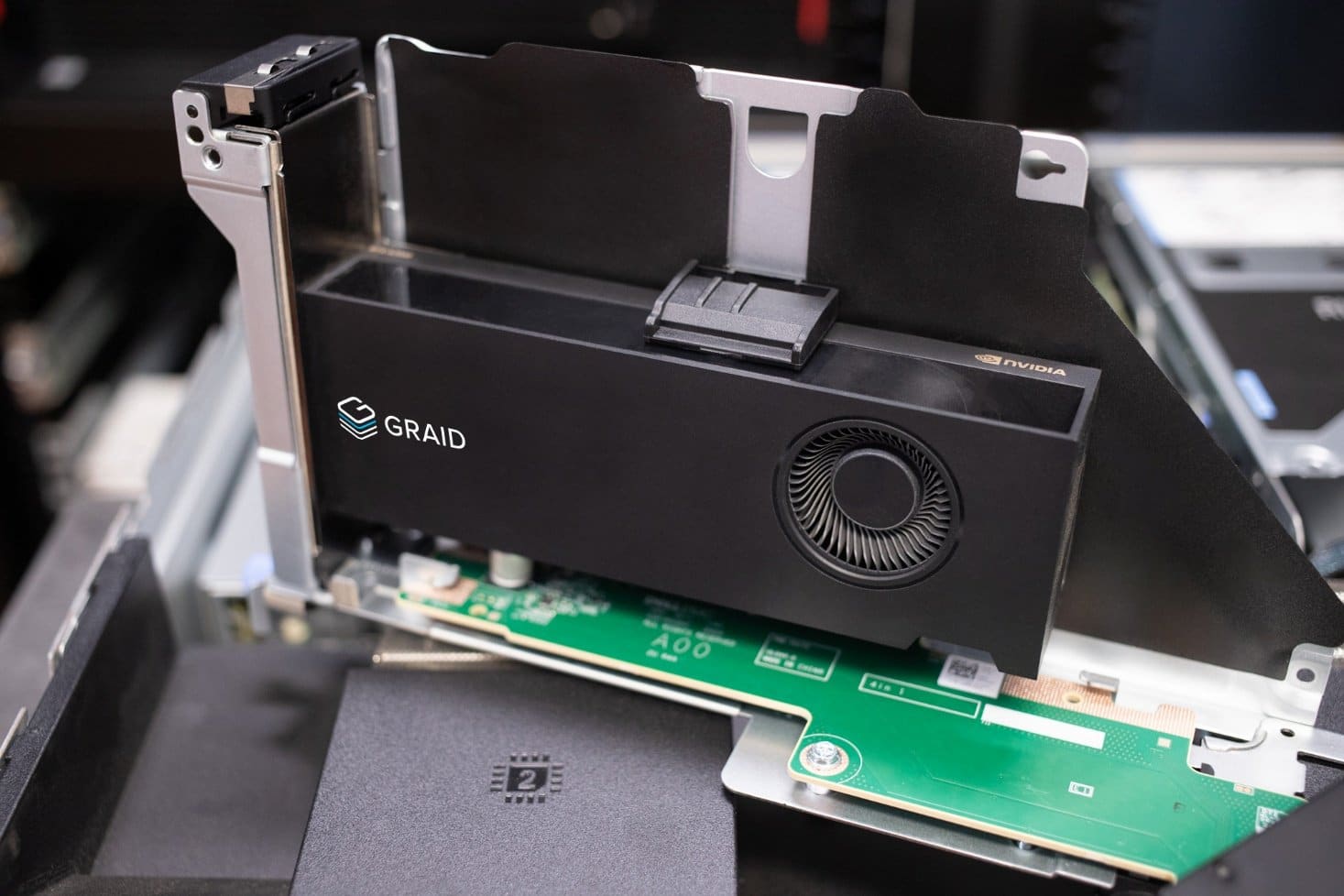 It was just a few months ago that we reviewed the SR-1000, so we’ll not belabor the point too much about what Graid’s mission is. But for those who want the brief version, Graid essentially saw a flaw in the way NVMe drives were being managed. Users were either using software RAID solutions to group SSDs together or they were using NVMe RAID cards that are full of their own challenges.

Software RAID is great in that it can be very low cost and easy to implement. But software RAID has penalties, specifically, there are CPU and system resources hits. Software RAID doesn’t have a hardware management component, so tasks must be offloaded to the system CPU and DRAM.

Physical RAID cards, which have been the standard for decades, haven’t been able to keep up with the pace of innovation in flash. A server with a Gen4 PCIe slot can only hope to attain 16GB/s out of a x8 slot or 32GB/s out of a x16 slot. The thing is, most RAID cards are x8, so a host system with even just 24 SSDs, would need multiple RAID cards to get to a point of full performance for the flash.

This gets us to the latest iteration of GPU-enabled RAID, the Graid SupremeRAID SR-1010. The SR-1010 supports up to 32 Gen4 SSDs in a single box. The updated hardware, software and interface let the SR-1010 post nice progressive gains over the first card, most notably when it comes to writes. The SR-1010 card itself is an NVIDIA A2000, that’s designed to support RAID0, 1, 5, 6 and 10 with Graid’s software. 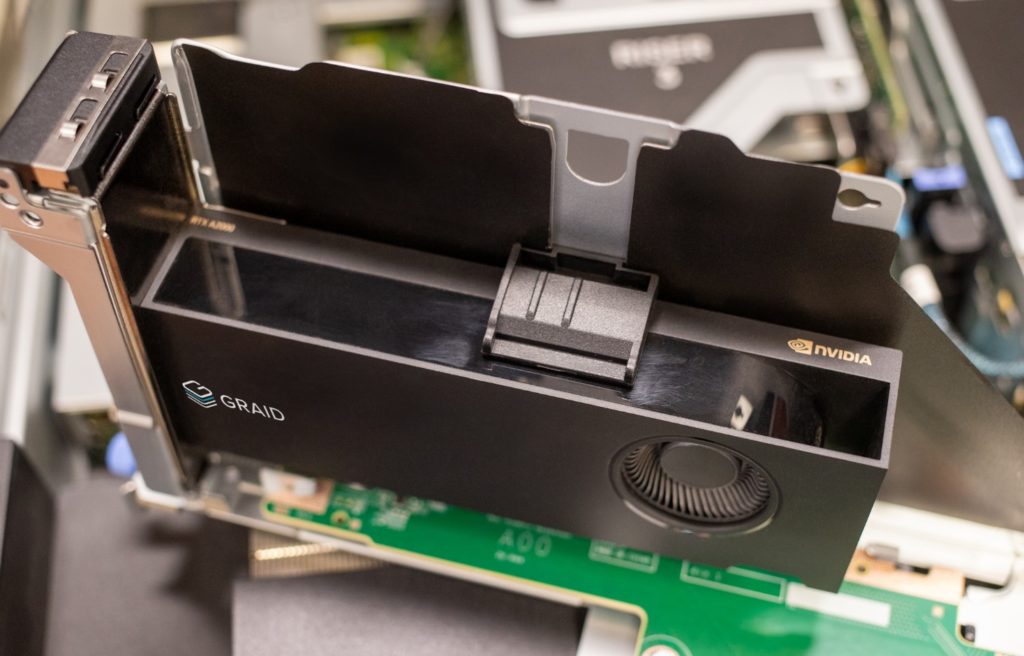 A more complete spec overview is below. View the detailed sheet from GRAID.

To measure the performance of the SupremeRAID SR-1010, we leveraged our Dell PowerEdge R750 running Ubuntu 20.04 with eight Gen4 NVMe bays in front. We leveraged eight of the Memblaze PBlaze6 6926 12.8TB SSD, giving us a large footprint of high-performance NAND to use in a RAID5 configuration.

Since these are different SSDs than our last review, we completed a full round of new tests comparing RAID5 configurations using software RAID versus the SR-1000 and SR-1010. For Software RAID we leveraged mdadm with a 64K chunk size. Tests were performed running FIO against the RAID volume.

Starting with sequential read bandwidth, the software RAID configuration had a slight edge, measuring 56.2GB/s versus 49.4GB/s on the SR-1000 and SR-1010.

Moving to sequential write though that lead switched back to Graid with a huge difference. We measured 1.3GB/s from software RAID compared to 11.1GB/s from the Gen3 SR-1000 and 17.7GB/ from the Gen4 SR-1010.

Moving down to the 4K random workload we continued to see huge gains, with 4K random write. The software RAID configuration measured just 73.9k IOPS compared to 838k IOPS on the SR-1000 and a much improved 1.56M IOPs on the SR-1010.

4K random write both the Graid versions had similar performance with 10.3M IOPS from the SR-1000 and 11M IOPS on the SR-1010 but were much higher than software RAID which measured 2.24M IOPS.

When looking at the Graid SupremeRAID SR-1010, we got exactly what we expected. While we were pleasantly surprised with the SR-1000 last year, with the SR-1010 we went in with higher expectations. To give the SR-1010 the best shot we could, we paired the Graid card with a high-spec server and eight of our best enterprise SSDs in the Memblaze 6926 drives. 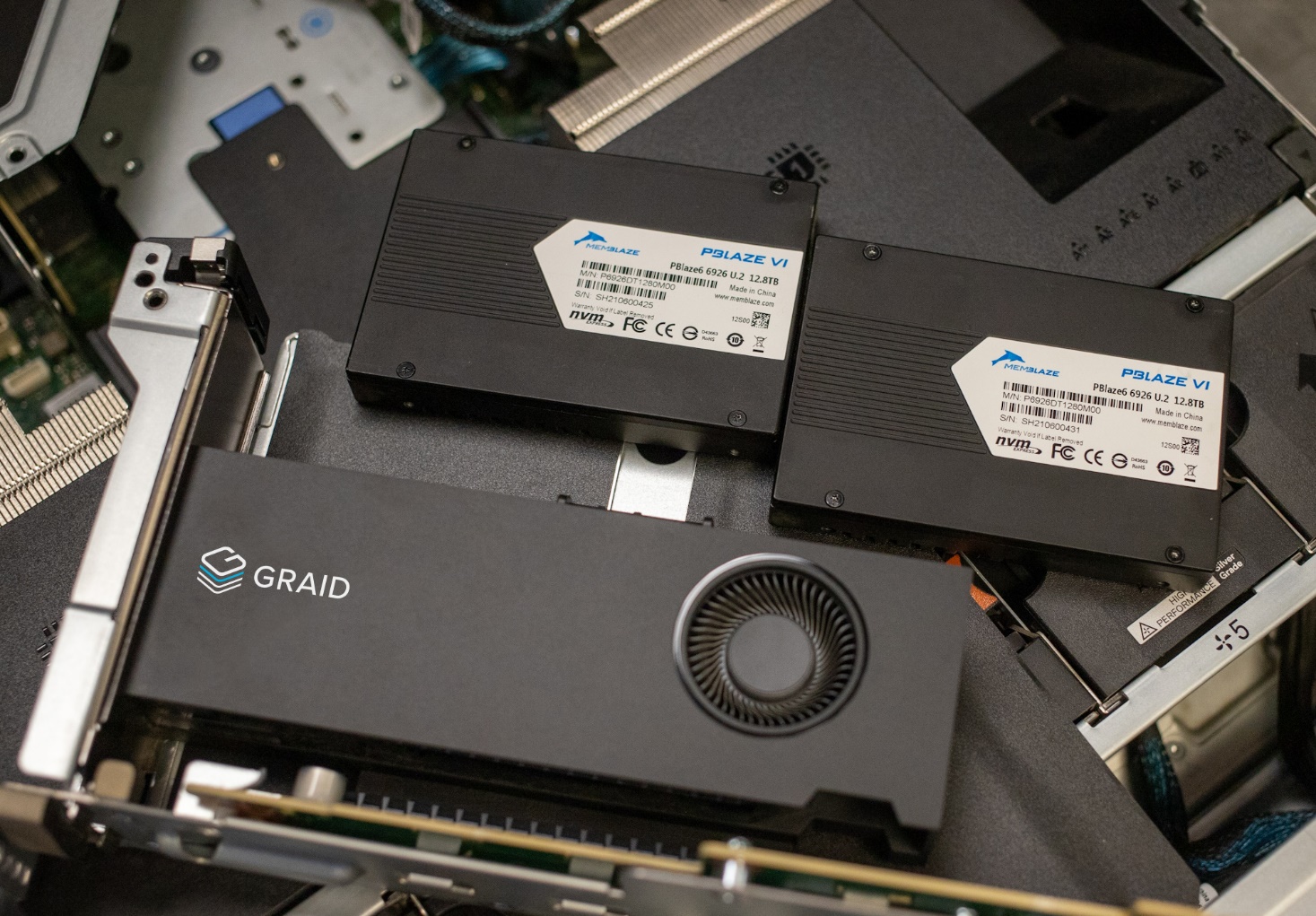 It should be noted that our performance results, while very good, won’t match the Graid spec simply due to the number of drives under test. While we’d love to revisit the Graid card with a fully-loaded 32 SSD configuration, we just don’t have that many matching SSDs in the lab.

Organizations that want the most out of their investment in NVMe SSDs have a lot of options. What most don’t realize though is that both software RAID and traditional hardware RAID cards both have serious limitations that effectively kneecap the most expensive components in a server, the SSDs. Graid opens up the flow of data while also freeing up system resources and/or I/O slots that would be used with legacy models. Setup is easy, performance gains are easily measurable. It’s well worth the PoC to see if these cards are the right fit.

Learn More About The Future of Enterprise Data Performance

Named one of the Ten Hottest Data Storage Startups of 2021 by CRN, Graid SupremeRAID™ performance is breaking world records. Contact us today to find out how Graid’s NVMe solution can unlock the full potential of your high performance workloads.

NEWS: ⏩ Graid Technology SupremeRAID™️ SR-1010 Featured in Hardware Cooking: a 110 GB/s “SSD” based on a GPU

Graid SupremeRAID SR-1010: an extraordinary SSD that looks like a graphics cardTo achieve this, the company uses a PCIe 4.0…

“SupremeRAID™ is an optimal addition to our portfolio to utilize the full performance of NVMe SSDs in a RAID array;…